Mental Illness Through the Ophthalmoscope: Back in Vogue?

The most conclusive evidence of insanity lay in the prisoner’s eyes and general appearance. Expert testimony about Charles Guiteau during his trial for the assassination of President Garfield.


Schizophrenia, a serious and debilitating condition, has baffled scientists and clinicians. What is it, who gets it, and how do we get rid of it? Understood until the 20th century as a precocious form of dementia, it has been studied up, down, and sideways, with many blind alleys and a few strong leads emerging. Between genetics, neuropharmacology, brain imaging, and translational studies, you’d think we’d have a handle on it. But not yet.
There was a fascinating article on retinal imaging in schizophrenia by Dr. Madeline Meier and international colleagues in the December 2013 issue of the American Journal of Psychiatry. New imaging techniques make it possible to perform quantitative analyses of microarterioles and venules in the retina. These vessels are homologs of those found in brain, making this technique a noninvasive way to examine blood supply in the brain. A cohort of about 1000 individuals from Dunedin, New Zealand born in 1972 and 1973 had been studied since age 3, with detailed health records. Schizophrenia was assessed at ages 21, 26, 32, and 38; 37 persons with the illness were found and 27 agreed to participate in the retinal imaging study. The comparison groups included hundreds of Dunedin cohort members with various conditions or in good health. The findings included vascular abnormalities among those with schizophrenia that could not be explained by concurrent illness: that there was insufficient blood supply to the brain and that the wider the venules, the earlier onset and more severe symptoms of psychosis.
Though the authors could not say whether the abnormality was a core feature of schizophrenia or an associated phenomenon, here’s an intriguing thought: Since increased venular diameter can be associated with inflammation, doesn’t this circle back to the inflammation theory of mental illness popular at the time the College was founded in 1787? Indeed, Benjamin Rush relied on this theory and, to relieve patients of inflammation of the brain (antiphlogistic approach), he was known to bleed them, sometimes with unintended negative consequences (I’m being kind).
The current research findings also bring to mind nineteenth-century attempts to understand mental functioning via ophthalmoscopy. This instrument became a clinical tool after Dr. Hermann von Helmholtz reinvented it in 1851. It was to revolutionize ophthalmology, not psychiatry.
In 1872 the Journal of Insanity published the results of examinations of 60 patients at the Utica, New York asylum. Dr. Henry Noyes was a consultant to Dr. John Gray, the Journal’s editor and the asylum’s superintendent. Naive, he had no hypothesis, undertaking what we might call a “fishing trip.” Dr. Gray, meanwhile, insisted on demonstrating physical causes of insanity and despised European theories such as “moral insanity.” A decade later, when he testified against President Garfield’s assassin Guiteau, Dr. Gray said the defendant was merely depraved. It appears that neither Dr. Gray nor Dr. Spitzka, the defense-side’s neurologist examined the defendant’s retinas. Could’ve been a game changer for Guiteau, who was convicted and promptly hanged in 1882. Examination of his brain (a chunk of which can be found in the Mütter Museum) showed inflammation consistent with syphilis.
Dr. Noyes found hyperemia of the retina and optic nerve among 9 of 11 patients with general paresis (central nervous system syphilis). With “dementia” he noted hyperemia in 12 of 18. A mélange of proposed underlying causes included epilepsy, masturbation, intemperance, and excessive sex. Dr. Noyes made no finer distinctions among those labeled with “mania” or “melancholia.” 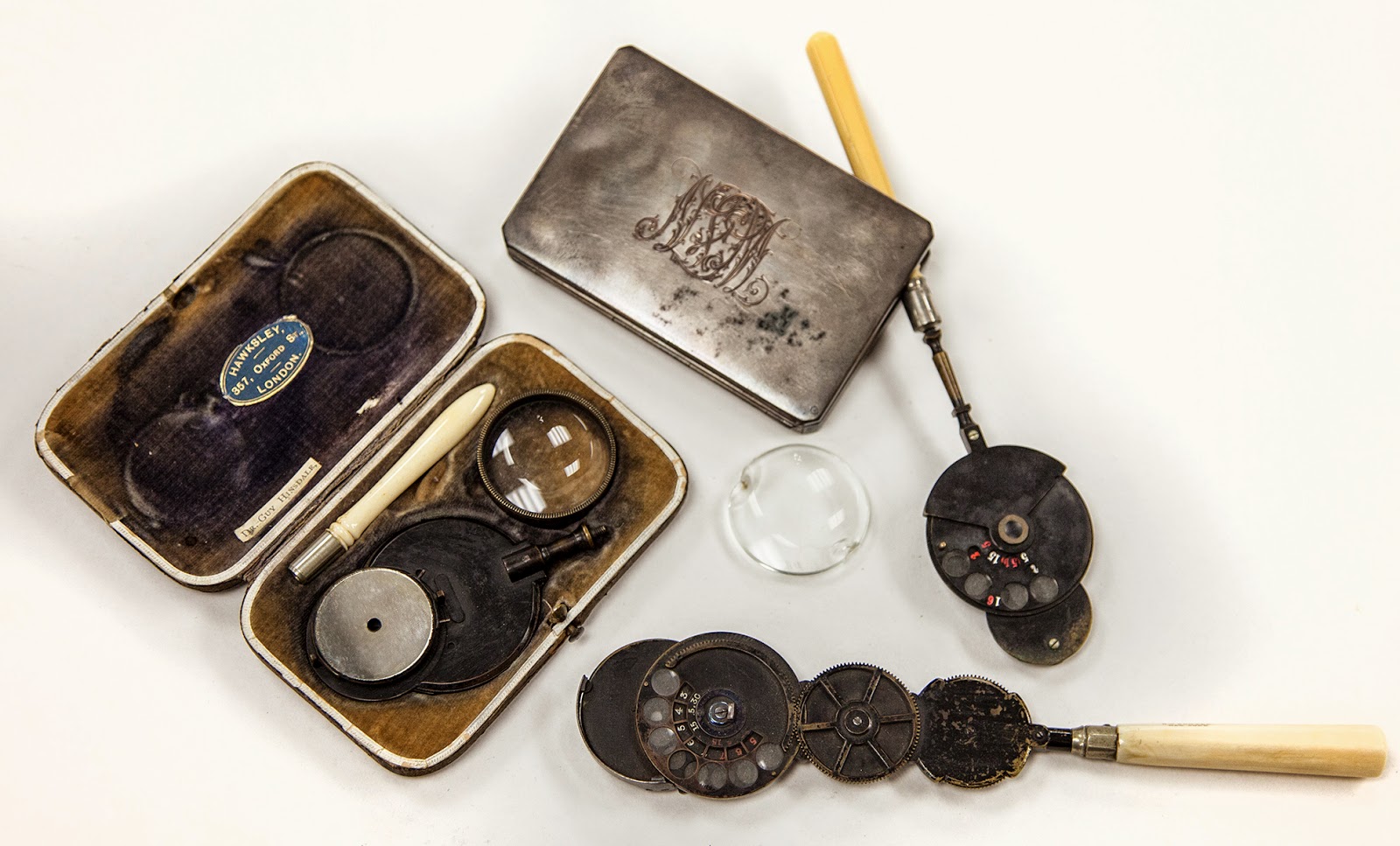 Early ophthalmoscopes from the Mütter Museum collection. Photo by Evi Numen
By 1886, the ophthalmoscope was widely employed, but schizophrenia had yet to become a term of art, and neurosyphilis went uncured. The spirochete T. pallidum was not observed until 1905 and penicillin not yet a twinkle in Alexander Fleming’s 5-year-old eye (serendipity struck in 1928). A Philadelphia ophthalmologist, Dr. Louis Lautenbach, and an asylum physician from Norristown, Dr. Alice Bennett, published their series of studies on 707 patients (577 females) with “acute mania,” “dementia,” and other conditions. Dr. Bennett, the first female physician to be in charge of an asylum building, had broad interests in the physical causes of insanity.
They published their findings in the Journal of Nervous and Mental Disease. Dr. Lautenbach argued the importance of the eye examination in insanity because of the anatomical proximity to the brain. Dr. Bennett, in the case histories, noted retinal hyperemia and/or congestion among many patients. While guardedly optimistic about their approach, they declined to draw conclusions about the relationship between insanity and ocular pathology. Then in 1889, Drs. Lautenbach and Bennett testified in the murder trial of Sarah Jane Whiteling, who poisoned her husband and two children. Their testimony about retinal hyperemia and female hormones was unpersuasive, and Whiteling was hanged.
Dr. Noyes had concluded modestly: “As in the brain, it is impossible often to see the true lesions without the higher power of the microscope; so for the optic nerve, we need much greater power than we yet have in the ophthalmoscope.” Now, with microvascular imaging, we are again empowered to approach the riddle of schizophrenia—by looking it square in the eye.

Posted by College of Physicians at 8:29 AM